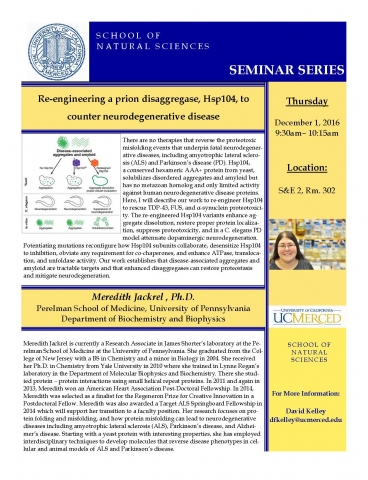 There are no therapies that reverse the proteotoxic misfolding events that underpin fatal neurodegenerative diseases, including amyotrophic lateral sclerosis (ALS) and Parkinson’s disease (PD). Hsp104, a conserved hexameric AAA+ protein from yeast, solubilizes disordered aggregates and amyloid but has no metazoan homolog and only limited activity against human neurodegenerative disease proteins. Here, I will describe our work to re-engineer Hsp104 to rescue TDP-43, FUS, and α -synuclein proteotoxicity. The re-engineered Hsp104 variants enhance aggregate dissolution, restore proper protein localization, suppress proteotoxicity, and in a C. elegans PD model attenuate dopaminergic neurodegeneration. Potentiating mutations reconfigure how Hsp104 subunits collaborate, desensitize Hsp104 to inhibition, obviate any requirement for co-chaperones, and enhance ATPase, translocation, and unfoldase activity. Our work establishes that disease-associated aggregates and amyloid are tractable targets and that enhanced disaggregases can restore proteostasis and mitigate neurodegeneration.

Meredith Jackrel is currently a Research Associate in James Shorter’s laboratory at the Perelman School of Medicine at the University of Pennsylvania. She graduated from the College of New Jersey with a BS in Chemistry and a minor in Biology in 2004. She received her Ph.D. in Chemistry from Yale University in 2010 where she trained in Lynne Regan’s laboratory in the Department of Molecular Biophysics and Biochemistry. There she studied protein – protein interactions using small helical repeat proteins. In 2011 and again in 2013, Meredith won an American Heart Association Post-Doctoral Fellowship. In 2014, Meredith was selected as a finalist for the Regeneron Prize for Creative Innovation in a Postdoctoral Fellow. Meredith was also awarded a Target ALS Springboard Fellowship in 2014 which will support her transition to a faculty position. Her research focuses on protein folding and misfolding, and how protein misfolding can lead to neurodegenerative diseases including amyotrophic lateral sclerosis (ALS), Parkinson’s disease, and Alzheimer’s disease. Starting with a yeast protein with interesting properties, she has employed interdisciplinary techniques to develop molecules that reverse disease phenotypes in cellular and animal models of ALS and Parkinson’s disease.