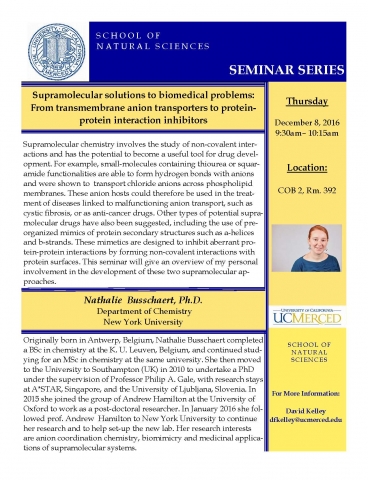 Supramolecular chemistry involves the study of non-covalent interactions and has the potential to become a useful tool for drug development. For example, small-molecules containing thiourea or squaramide functionalities are able to form hydrogen bonds with anions and were shown to transport chloride anions across phospholipid membranes. These anion hosts could therefore be used in the treatment of diseases linked to malfunctioning anion transport, such as cystic fibrosis, or as anti-cancer drugs. Other types of potential supramolecular drugs have also been suggested, including the use of pre-organized mimics of protein secondary structures such as a-helices and b-strands. These mimetics are designed to inhibit aberrant protein-protein interactions by forming non-covalent interactions with protein surfaces. This seminar will give an overview of my personal involvement in the development of these two supramolecular approaches.

Originally born in Antwerp, Belgium, Nathalie Busschaert completed a BSc in chemistry at the K. U. Leuven, Belgium, and continued studying for an MSc in chemistry at the same university. She then moved to the University to Southampton (UK) in 2010 to undertake a PhD under the supervision of Professor Philip A. Gale, with research stays at A*STAR, Singapore, and the University of Ljubljana, Slovenia. In 2015 she joined the group of Andrew Hamilton at the University of Oxford to work as a post-doctoral researcher. In January 2016 she followed prof. Andrew  Hamilton to New York University to continue her research and to help set-up the new lab. Her research interests are anion coordination chemistry, biomimicry and medicinal applications of supramolecular systems.