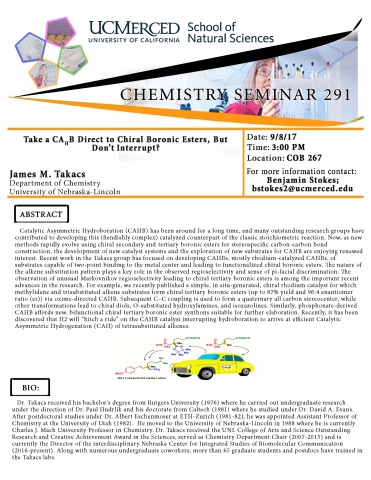 Dr. Takacs received his bachelor's degree from Rutgers University (1976) where he carried out undergraduate research under the direction of Dr. Paul Hudrlik and his doctorate from Caltech (1981) where he studied under Dr. David A. Evans. After postdoctoral studies under Dr. Albert Eschenmoser at ETH-Zurich (1981-82), he was appointed Assistant Professor of Chemistry at the University of Utah (1982). He moved to the University of Nebraska-Lincoln in 1988 where he is currently Charles J. Mach University Professor in Chemistry. Dr. Takacs received the UNL College of Arts and Science Outstanding Research and Creative Achievement Award in the Sciences, served as Chemistry Department Chair (2007-2013) and is currently the Director of the interdisciplinary Nebraska Center for Integrated Studies of Biomolecular Communication (2016-present). Along with numerous undergraduate coworkers, more than 65 graduate students and postdocs have trained in the Takacs labs.