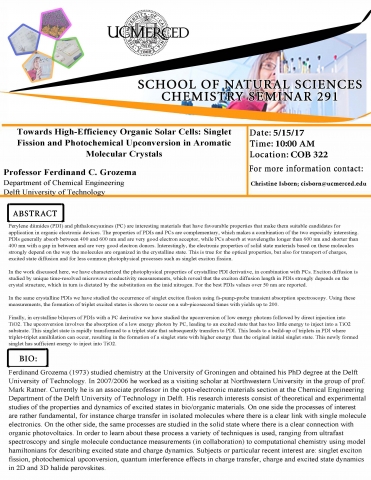 Perylene diimides (PDI) and phthaloncyanines (PC) are interesting materials that have favourable properties that make them suitable candidates for application in organic electronic devices. The properties of PDIs and PCs are complementary, which makes a combination of the two especially interesting. PDIs generally absorb between 400 and 600 nm and are very good electron acceptor, while PCs absorb at wavelengths longer than 600 nm and shorter than 400 nm with a gap in between and are very good electron donors. Interestingly, the electronic properties of solid state materials based on these molecules strongly depend on the way the molecules are organized in the crystalline state. This is true for the optical properties, but also for transport of charges, excited state diffusion and for less common photophysical processes such as singlet exciton fission.

In the work discussed here, we have characterized the photophysical properties of crystalline PDI derivative, in combination with PCs. Exciton diffusion is studied by unique time-resolved microwave conductivity measurements, which reveal that the exciton diffusion length in PDIs strongly depends on the crystal structure, which in turn is dictated by the substitution on the imid nitrogen. For the best PDIs values over 50 nm are reported.

In the same crystalline PDIs we have studied the occurrence of singlet exciton fission using fs-pump-probe transient absorption spectroscopy. Using these measurements, the formation of triplet excited states is shown to occur on a sub-picosecond times with yields up to 200.

Finally, in crystalline bilayers of PDIs with a PC derivative we have studied the upconversion of low energy photons followed by direct injection into TiO2. The upconversion involves the absorption of a low energy photon by PC, leading to an excited state that has too little energy to inject into a TiO2 substrate. This singlet state is rapidly transformed to a triplet state that subsequently transfers to PDI. This leads to a build-up of triplets in PDI where triplet-triplet annihilation can occur, resulting in the formation of a singlet state with higher energy than the original initial singlet state. This newly formed singlet has sufficient energy to inject into TiO2.