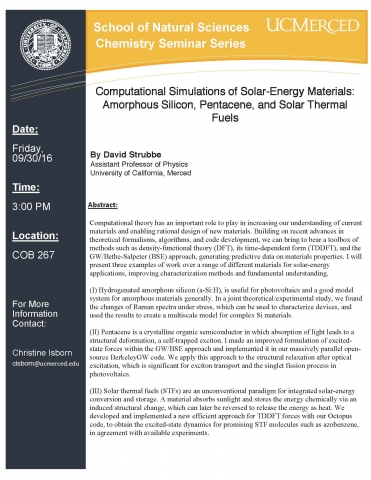 Computational theory has an important role to play in increasing our understanding of current materials and enabling rational design of new materials. Building on recent advances in theoretical formalisms, algorithms, and code development, we can bring to bear a toolbox of methods such as density-functional theory (DFT), its time-dependent form (TDDFT), and the GW/Bethe-Salpeter (BSE) approach, generating predictive data on materials properties. I will present three examples of work over a range of different materials for solar-energy applications, improving characterization methods and fundamental understanding.

(I) Hydrogenated amorphous silicon (a-Si:H), is useful for photovoltaics and a good model system for amorphous materials generally. In a joint theoretical/experimental study, we found the changes of Raman spectra under stress, which can be used to characterize devices, and used the results to create a multiscale model for complex Si materials.
(II) Pentacene is a crystalline organic semiconductor in which absorption of light leads to a structural deformation, a self-trapped exciton. I made an improved formulation of excited-state forces within the GW/BSE approach and implemented it in our massively parallel open-source BerkeleyGW code. We apply this approach to the structural relaxation after optical excitation, which is significant for exciton transport and the singlet fission process in photovoltaics.
(III) Solar thermal fuels (STFs) are an unconventional paradigm for integrated solar-energy conversion and storage. A material absorbs sunlight and stores the energy chemically via an induced structural change, which can later be reversed to release the energy as heat. We developed and implemented a new efficient approach for TDDFT forces with our Octopus code, to obtain the excited-state dynamics for promising STF molecules such as azobenzene, in agreement with available experiments.