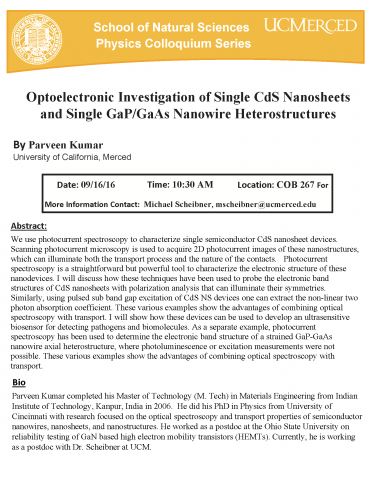 We use photocurrent spectroscopy to characterize single semiconductor CdS nanosheet devices. Scanning photocurrent microscopy is used to acquire 2D photocurrent images of these nanostructures, which can illuminate both the transport process and the nature of the contacts.   Photocurrent spectroscopy is a straightforward but powerful tool to characterize the electronic structure of these nanodevices. I will discuss how these techniques have been used to probe the electronic band structures of CdS nanosheets with polarization analysis that can illuminate their symmetries. Similarly, using pulsed sub band gap excitation of CdS NS devices one can extract the non-linear two photon absorption coefficient. These various examples show the advantages of combining optical spectroscopy with transport. I will show how these devices can be used to develop an ultrasensitive biosensor for detecting pathogens and biomolecules. As a separate example, photocurrent spectroscopy has been used to determine the electronic band structure of a strained GaP-GaAs nanowire axial heterostructure, where photoluminescence or excitation measurements were not possible. These various examples show the advantages of combining optical spectroscopy with transport.