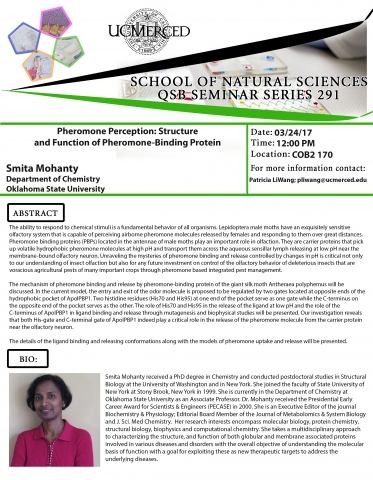 The ability to respond to chemical stimuli is a fundamental behavior of all organisms. Lepidoptera male moths have an exquisitely sensitive olfactory system that is capable of perceiving airborne pheromone molecules released by females and responding to them over great distances. Pheromone binding proteins (PBPs) located in the antennae of male moths play an important role in olfaction. They are carrier proteins that pick up volatile hydrophobic pheromone molecules at high pH and transport them across the aqueous sensillar lymph releasing at low pH near the membrane-bound olfactory neuron. Unraveling the mysteries of pheromone binding and release controlled by changes in pH is critical not only to our understanding of insect olfaction but also for any future investment on control of the olfactory behavior of deleterious insects that are voracious agricultural pests of many important crops through pheromone based integrated pest management.

The mechanism of pheromone binding and release by pheromone-binding protein of the giant silk moth Antheraea polyphemus will be discussed. In the current model, the entry and exit of the odor molecule is proposed to be regulated by two gates located at opposite ends of the hydrophobic pocket of ApolPBPl. Two histidine residues (His70 and His95) at one end of the pocket serve as one gate while the (-terminus on the opposite end of the pocket serves as the other. The role of His70 and His95 in the release of the ligand at low pH and the role of the
(-terminus of ApolPBPl in ligand binding and release through mutagenesis and biophysical studies will be presented. Our investigation reveals that both His-gate and (-terminal gate of ApolPBPl indeed play a critical role in the release of the pheromone molecule from the carrier protein near the olfactory neuron.
The details of the ligand binding and releasing conformations along with the models of pheromone uptake and release will be presented.
Flyer File