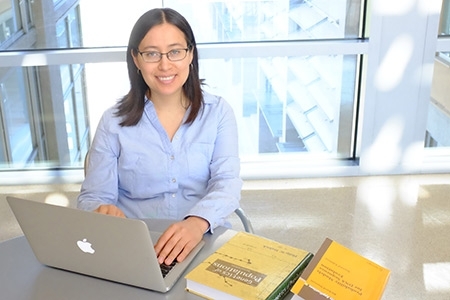 A new study identifies genetic changes in Native Americans that came about when Europeans settled in the Pacific Northwest and might have played a major role in why so many natives died of infectious disease.

In a new paper in Nature Communications, “A Time Transect of Exomes from a Native American Population Before and After European ContactOpens a New Window.,” UC Merced Professor Emilia Huerta-Sánchez and collaborators show that the Tsimshian, a First Nations community in the Prince Rupert Harbor region of British Columbia in Canada, had mutations that might have made them more susceptible to diseases introduced during European colonization.

European-borne epidemics including influenza, malaria and smallpox wiped out between 65 percent and 95 percent of the northwestern native populations by 1840.

The study is both revealing and novel.

“This is one of the first studies where we are able to look at the same population, but at different times,” Huerta-Sánchez said. “We have samples from before and after the epidemics.”

Humans have both innate and dynamic immune systems, and people in different areas adapt to different pathogens and environments. When Europeans colonized the Northwest and brought their livestock, plants and germs, the environment changed. The researchers found that mutations emerged in a particular immunity gene in Native Americans.

“Mutations in the human leucocyte antigen (HLA) gene HLA-DQA1 had been beneficial to them, but likely became harmful in the presence of smallpox,” she said. “Even if a population is completely adapted to its local environment, variations can make people vulnerable, too.”

Changes didn’t only affect the human population at that time, either. Exotic plant and animal species brought from Europe altered some of the Pacific Northwest landscape, as well. Game birds, livestock including pigs, sheep and horses, songbirds and a variety of plants, trees and shrubs were introduced to the Northwest, as well.

“There were many changes at that time, and this likely led to frequency changes in some genetic variants,” said Huerta-Sánchez, a molecular cell biologist with the School of Natural SciencesOpens a New Window. and the Health Sciences Research InstituteOpens a New Window.. Her long-term goal is to understand the human genetic landscape, how it has been shaped by evolution and how variants affect human disease.

Being able to identify genetic changes has implications for advances in precision medicine, she said.

“Just as we were able to find a mutation that became harmful, we could also find mutations that could help people fight diseases,” she said.