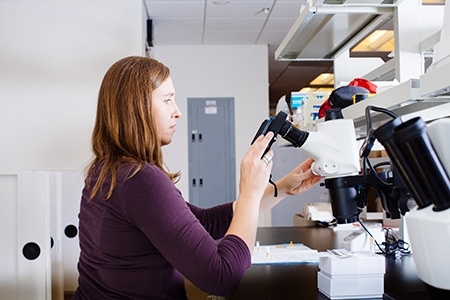 The rapid pace of global change has large impacts on nature, and on the work conservation biologists will have before them, too.

From here on out, experts say, the fossil record is going to be critical to guide nature into the future.

A new paper in the journal Science Opens a New Window., co-authored by UC Merced paleoecology Professor Jessica Blois, contends that rather than holding ecosystems to an idealized past, preserving and maintaining vibrant ecosystems requires new approaches. That includes using Earth’s history to help understand how ecological resilience is maintained even in the face of change.

“Focusing our conservation efforts on preserving single species has served us well,” said Blois, with the School of Natural Sciences Opens a New Window.. “But each species is only on Earth for a limited time, and with climate change, we also need to think about the role that species plays in its ecosystem. We need to look at the traits a species has.”

Ecosystems are inextricably intertwined. Blois pointed to the nature reserve adjacent to the campus as an example. The cows that graze there now fulfill some of the same functions the wild elk and pronghorn that used to live there did, namely keeping down the weeds, aerating the soil and creating indentations where water gathers and fairy shrimp can thrive.

But do the cows function as well as the pronghorn did? And how can humans help keep such ecosystems not just alive but robust when some of the elements go missing?

Species turnover and change have occurred throughout the history of life on Earth. Even though the best approaches to conservation are subject to debate, in the end, humans need to work to allow or enhance the resilience of natural ecosystems so they can continue to adapt and function into the future, said Blois and her colleagues.

She and 40 other scientists from around the globe formed a working research group that studied a wide array of issues surrounding conservation efforts in changing climates and wrote the paper. The group included ecologists, conservation biologists, paleobiologists, geologists, lawyers, policy makers and nature writers, and grew out of a 2015 conference at UC Berkeley.

They, like many others, are concerned because the pace and magnitude of human-caused global change has accelerated dramatically over the past 50 years.

That has overwhelmed the capacity of many ecosystems and species to maintain themselves as they have under the more stable conditions that prevailed for at least 11,000 years.

The next few decades threaten even more rapid transformations because by 2050, the human population is projected to grow by 3 billion while simultaneously increasing per capita consumption, the scientists wrote.

“We know that humans have greatly impacted other species and the Earth in many ways, and human-caused climate change amplifies those impacts,” Blois said. “We need to know whether species can adapt to an Earth that has been so heavily changed by humans.”

By looking at how different ecosystems have persisted and adapted through other periods of rapid change, they believe they can learn about the resilience of such systems and apply that information to the different methods of preserving ecosystems.

Understanding the specific functions served by different members of ecosystems can provide insight into how humans need to move forward.

“Maybe the critical roles can be preserved even if we can’t fully restore an ecosystem,” she said. “Or we can maximize the biodiversity of some systems, even as we maximize the benefits humans get from them. You want to have a suite of tools for conservation. The paleo-perspective is one of them, and is often essential to figuring out which strategy to use.”

The best ways to preserve ecosystems will depend on the systems themselves.

But Blois is optimistic.