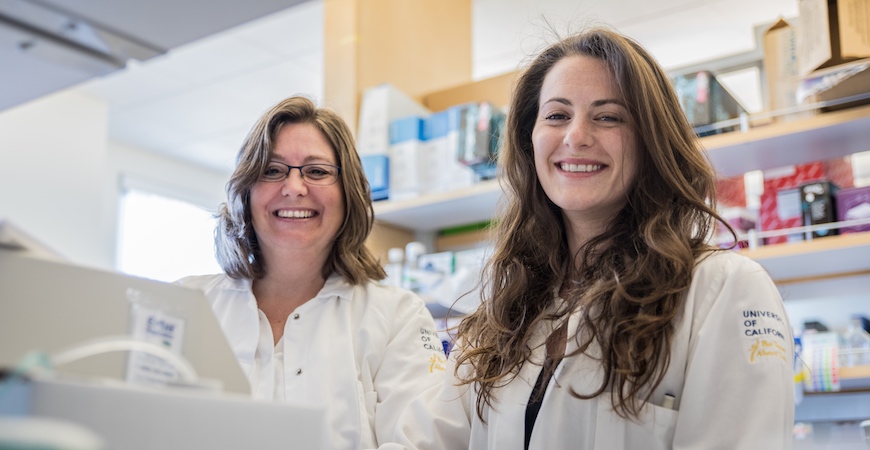 In 1998, scientists studying rheumatoid arthritis observed a population of immune cells that weren’t behaving the way they were supposed to. Immunologists noted the strange phenomenon, but decided not to pursue the subject further, and the cells were soon forgotten.

But interest in these cells has swelled over the past few years as they’ve been found in patients with chronic viral infections and cancer.

“Autoimmune disease is when your immune cells — whose job is to fight infections such as viruses, bacteria, fungal infections and things like that — make a mistake and instead target your own cells for destruction,” Valentine explained. “The immune system does all the same things it normally does in response to an invading pathogen, but with your own body as the target.”

Valentine and Hoyer were studying autoimmune diseases in mice when they found CD8 T cells — similar to those first identified in 1998 — popping up in strange places in mice with autoimmune hemolytic anemia (AIHA), a disease where the immune system targets healthy red blood cells for destruction.

CD8 T cells are the immune system’s “killers” – so named because they slay pathogen-infected cells to prevent the pathogen from spreading. CD8 T cells and other types of immune cells are supposed to hang out in separate areas of the lymph nodes, but Hoyer said some killer cells were “misbehaving.”

“We noticed that some CD8 T cells were moving into an area where they had not been seen before,” she said.

The killer cells were spotted in areas of the lymph nodes usually reserved for B cells — immune cells that produce antibodies, special proteins that engulf invading pathogens and tell other immune cells to destroy invaders.

Even stranger, the killers that had infiltrated the B cell region weren’t behaving like killers. They were acting like “helpers.”

Autoimmune disease is when your immune cells...make a mistake and instead target your own cells for destruction.

Helper cells, or CD4 T cells, are the immune system’s conductors. They help activate other immune cells — like killer cells and B cells — and tell them how to do their job better.

The CD8 T cells found in the area reserved for B cells were behaving like CD4 T cells and telling the B cells to produce antibodies that targeted red blood cells for destruction. After eliminating the CD8 T cells, there was a huge reduction in antibody production.

In other words, these misbehaving killers were promoting autoimmune disease.

“Kristen identified a subset of the killer population that seems to behave more like helper cells,” Hoyer said. “They still seem to have the capacity to be killers, but they also have acquired the ability to help B cells do what they do better.”

Until this discovery was made, scientists hadn’t seen killers acting like helpers. It’s a breakthrough that upsets much of the prevailing wisdom about how autoimmune diseases progress.

“It was thought that CD4 T cells were carrying most of the disease-promoting capacity,” Valentine said. “What we’ve been able to show is that these CD8 T cells can influence the function of other cells in a helper-like capacity. Without the CD8 T cells, you get a very significantly delayed disease.”

How delayed? After getting rid of these misbehaving CD8 T cells, mice with AIHA survived two and a half months — a huge improvement over the usual three weeks.

Valentine and Hoyer hope the story doesn’t end there.

Valentine, who recently received the UC President's Dissertation Year Fellowship, will continue to study these helper-like killers during her final year of graduate school. And she hopes to identify therapies that repress the cells’ activity and slow the progression of autoimmune diseases