By Jason Alvarez, UC Merced
May 23, 2018
QSB graduate student Kinsey Brock and undergraduate researcher Indiana Madden made the first documented discovery of cannibalism in a subspecies of wall lizard on the Greek island of Siros. Video courtesy of Indiana Madden.

It reads like a mashup of Greek mythology and H.G. Wells. “The Odyssey of Doctor Moreau,” perhaps. Explorers find their way to a remote Aegean island and discover it’s inhabited by reptilian cannibals. They describe one encounter as follows:

“[I]t began to run away, with the dead lizard torso and head still in its mouth. The cannibal continuously ran along the top of a wall and paused intermittently to thrash the corpse against the cement.”

This grisly description isn’t from a horror story. Nor is it a macabre vignette from Greek mythology. It’s from a scientific paper authored by Kinsey Brock — Quantitative Systems Biology doctoral student and two-time Southern California Edison Fellowship recipient — and her undergraduate field assistant Indiana Madden. They recently published a paper in Herpetology Notes reporting their discovery of lizard cannibalism in a subspecies of Aegean wall lizard, Podarcis erhardii mykonensism, native to the island of Siros.

“I was catching lizards for Kinsey’s Ph.D. project when I saw a large male lizard perched on a stone wall thrashing its head with something in its mouth,” Madden said. “I thought it was eating a butterfly or something because it was pretty big, so I got closer to try to noose it. I was about three steps away when it turned around and I saw that it had the severed upper torso of another adult lizard of the same species!”

Luckily, the lizard stuck around long enough for Madden to document her discovery.

“The cannibal didn’t run immediately,” Madden said. “It just kind of stared at me with the corpse hanging out of its mouth — long enough for me to take a picture — then it ran away with its prey still clutched in its jaws.” 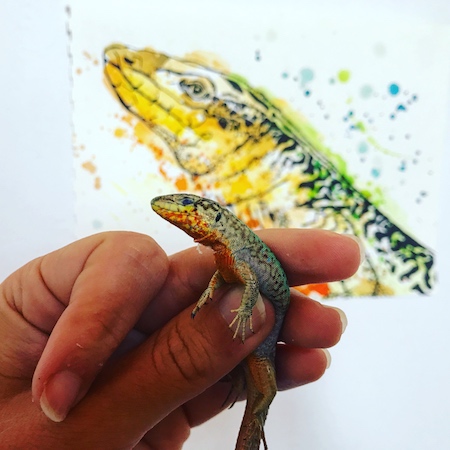 Brock and Madden weren’t looking for cannibal lizards. The pair were island-hopping in the Aegean — in the name of science, not leisure. It’s one of the perks of working for Professor Dan Edwards, who studies how the environment affects the evolution of reptile appearance and behavior. And it just so happens that Aegean islands provide scientists with natural laboratories for lizard evolution.

During the last ice age, which ended some 12,000 years ago, the Aegean islands and Greek mainland were a single contiguous landmass. The Aegean wall lizard, unconstrained by maritime barriers, dispersed across the entire region. But the ice age ended, ice melted and sea levels rose.

Valleys were deluged and highlands were transformed into islands — today’s Aegean archipelago. Lizard populations that used to interbreed were suddenly marooned. As time passed and each island developed its own ecosystem, the lizards were forced to evolve or perish. Today, scientists like Brock and Madden visit the archipelago to understand how evolution produced so many unique adaptations.

“I’m interested in understanding how the landscape and ecology of an island affects the way lizards look and behave in their environment,” Brock said. “It’s incredible the array of adaptations we see in different island populations of lizards.”

Brock said each wall lizard population adapted to its island home differently. On islands with no predators, lizards are larger, look similar to one another and have simple diets. They also behave more aggressively and have stronger bite forces. On islands with diverse vegetation, diets are more diverse and there’s more variability in color, pattern and body size within lizard populations. And now, with their new discovery, cannibalism can be counted among the lizard’s adaptive strategies, at least on Siros. 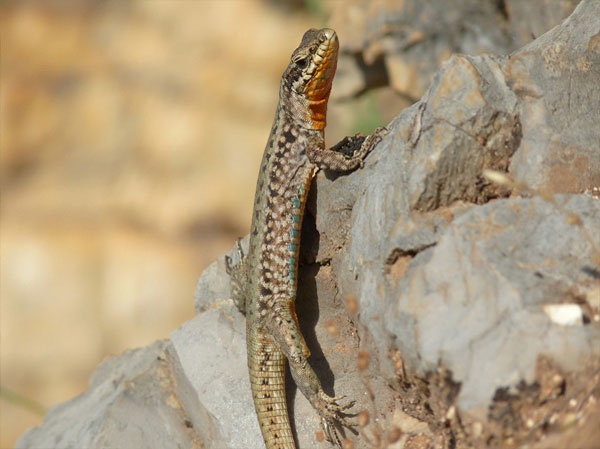 “We’re just starting to understand these patterns of evolution in this system,” Brock said.

“A big, open question in evolutionary biology is ‘how predictable is evolution?’” Brock said.

And that’s not the only lingering mystery. Brock and Madden are still trying to figure out why cannibalism emerged on Siros.

“Cannibalism provides an opportunity that’s probably too good to pass up,” Madden said. “Not only can you get vital nutrients and energy that might otherwise not be available in your environment, but you also eliminate a potential competitor — for food, mates, territory, etc.”

“What’s interesting about this case is that there were plenty of insects — the primary food of P. erhardii — around where we found the cannibal. Yet an extreme case of adult-on-adult cannibalism occurred,” Madden said. “It sounds morbid to us, but if you’re a male lizard whose instinct is to control as much territory, get big and strong, and mate — as much as possible — then it makes sense why an animal would consume another competitor.

“All is fair in lizard love, mating and war.”