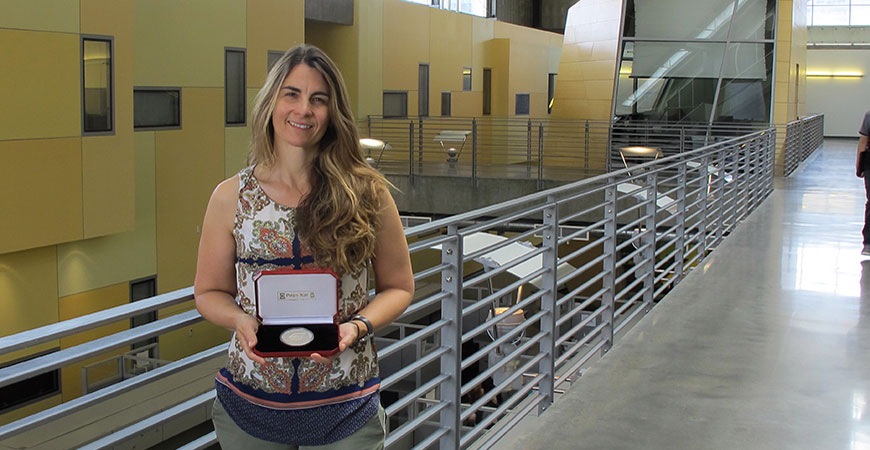 Physics Professor Linda Hirst has been named this year’s recipient of the British Liquid Crystal Society’s C. Hilsum Medal for her contributions to liquid crystal science and technology.

She journeyed to Leeds, England, to receive the prestigious medal, attend an awards dinner and deliver the keynote speech.

“It’s a huge honor to get this recognition,” Hirst said. “I’ve been lucky to work with so many amazing students and colleagues over the years.”

Hirst is a member of the Department of Physics in the School of Natural Sciences and an affiliate of the Health Sciences Research Center, the Center for Cellular and Biomolecular Machines and the Merced nAnomaterials Center for Energy and Sensing. She is the author of “ Fundamentals of Soft Matter Science,” a new edition of which is scheduled for release this year.

“Professor Hirst is an outstanding scientist and colleague,” said Dean of the School of Natural Sciences Betsy Dumont. “It is wonderful to see her work recognized with this prestigious international honor.” 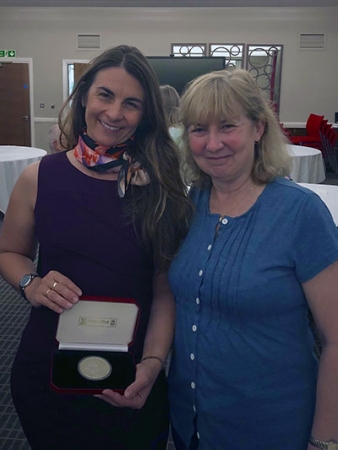 Professor HIrst and her Ph.D. adviser, Helen Gleeson, the first recipient if the Hillsum Medal

Hirst served as an executive council member for the American Physical Society, and received a National Science Foundation CAREER award and the International Liquid Crystal Society's Glenn Brown Prize. This spring, she will graduate her 10th Ph.D. student.

The awards ceremony was also an opportunity for Hirst to reconnect with her Ph.D. adviser, Professor Helen Gleeson, the first recipient of the Hilsum Award. Gleeson chairs the Department of Physics at the University of Leeds.

The Hilsum Award is not given every year. It typically goes to active, mid-career researchers in academia or industry who have made notable contributions to the subject, usually over the previous decade. It is named for Cyril Hilsum, head of the Malvern Displays Group, a pioneer in the development of liquid crystal materials and displays.

Hirst’s work involves soft-matter physics and how the field applies to human health, including creating biological structures out of liquid crystals, such as molecular motors and protein filaments called microtubules. She is also developing new methods to assemble nanoparticles into three-dimensional structures using liquid crystal fluids.

“This award is a recognition of the outstanding quality of Linda's research at UC Merced, which has ranged from synthetic liquid crystals to active biological materials,” said Professor Ajay Gopinathan, chair of UC Merced’s Department of Physics. “She exemplifies the excellence in collaborative research in physics at UC Merced and we are very proud to have her as a member of our faculty in the Physics Department.”