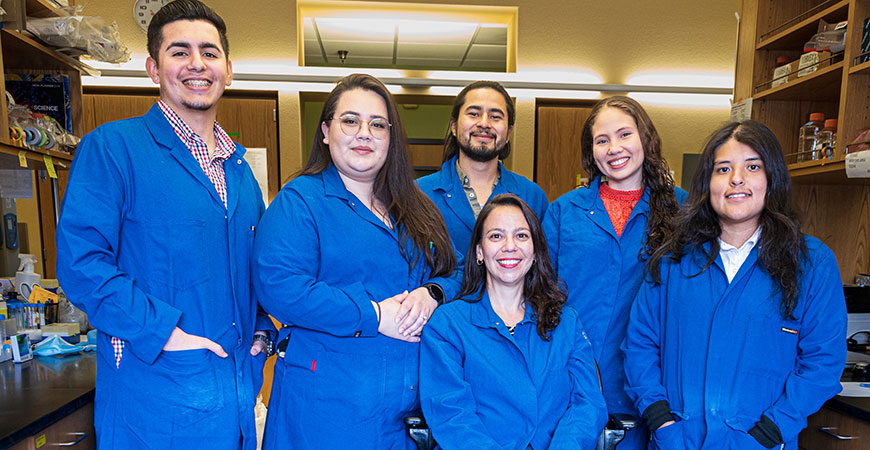 Professor Zoghbi, seated, and some of the students in her lab. Photo by Veronica Adrover.

Professor Maria-Elena Zoghbi and her lab are taking a closer look at a human transporter protein that acts as a cellular protector by relocating a molecule that has important antioxidant properties in the cells, preventing oxidative damage in several tissues, including the heart.

The National Institutes of Health (NIH) awarded Zoghbi a more than $1.2 million RO1 grant to study how the protein ABCB10 moves a molecule called biliverdin out of the mitochondria. She aims to understand the mechanics of ABCB10 and offer ideas on how it can be controlled for therapeutic purposes.

Over the next four years, Zoghbi and her lab, including undergraduate and graduate students, will build on research they have been pursuing since 2017.

Zoghbi and her students developed a new methodology to produce the protein and study it in vitro, using cultured bacterial cells.

Heme, synthesized in the mitochondria, is a precursor to hemoglobin and is necessary to bind oxygen in the bloodstream, which carries it to tissues. An excess of heme can damage the cells, so the level of heme molecules needs to be controlled. Excess heme is converted to biliverdin, which instead of being dangerous, protects the cells against oxidation. Relocation of biliverdin within the cell is essential for human health.

That’s where ABCB10 comes in.

The lab compiled data to demonstrate to the NIH that the lab could succeed at what Zoghbi has now proposed — to understand the interaction between ABCB10 and the molecule it binds to and how that interaction causes the protein to move in certain ways within the mitochondrial membrane.

To do that, lab members are attaching fluorescent probes to the molecules, and can measure the movements in short distances. But they need to make sure that what they are attaching does not affect the interactions.

“We need to study it in conditions as close to real life as possible so we can get data that is relevant and useful. We want to see what changes the protein is undergoing as it is working and interacting with this molecule,” Zoghbi said. “If we can control it, we can use that knowledge to try to design drugs or therapies for anemia or heart oxidation.”

The undergrads in Zoghbi’s lab play important roles in the research. They learn how to produce the ABCB10, make media, grow cells, express the protein, do the initial steps of protein purification and help measure the movements.

“We have a big emphasis on training students, and this project is really good for the undergraduates because they will get to do in the lab what they've been studying in their classes,” she said.

This is Zoghbi’s third NIH grant since she joined the Department of Molecular and Cell Biology and the Health Sciences Research Institute in 2016.

The first, an R15, supported the work on ABCB10 that showed the project is RO1-worthy. She received an R21 last year for a related project, studying the two other mitochondrial transporters —ABCB7, which is implicated in iron transport, and ABCB8, which is involved in regulating a mitochondrial potassium channel and other functions.