Big Change a Chance for Big Opportunities for Grad Student 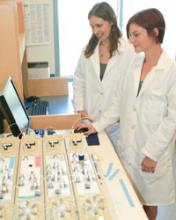 Chicagoan Chelsea Carey (pictured on the right) faced quite a change in choosing UC Merced for her natural sciences graduate studies. But she knew she wanted to work with Professor Stephen Hart for her environmental systems research.

“I did a lot of searching (for a mentor) based on my research interests,” Carey said.

She corresponded with about 50 professors all over the country, and narrowed down her choices to three. But she had heard about Hart’s research through her lab coordinator at DePaul University, and said she made the right choice. She was Hart’s inaugural graduate student.

“He is an awesome ecologist,” Carey said. “I really wanted to work with him.”

Now in her fourth year here, Carey is done with classes and continues her research in soil ecology. She studies how soil nitrogen cycling and the microbial community are affected by global changes such as nitrogen deposition, cattle grazing and invasive species.

Carey connected with a UC Davis researcher who already had an experiment under way that she wanted to get involved with. Every six weeks, she travels to Davis to take her soil samples. The rest of her time is spent here, teaching ecology, conducting research in her lab and working on campus issues as the external vice president of the Graduate Students Association (GSA).

“The personal experience I’ve had here has been better than I ever expected,” she said. Coming from a much larger city and not knowing anyone was intimidating at first, but Carey made a good group of friends right away, she said.

She shares a house in Merced with a fellow grad student who studies quantitative psychology, so Carey said she gets to meet, socialize and work with students from other study areas, instead of just being pigeon-holed into one.

“It’s a very collaborative environment,” she said. Plus, her roommate is president of the grad student association, so “we joke that we live in the White House.” The house, she said, is perfect for the two students, because there’s plenty of room and “it’s cheap.”

While she’s always busy and the work is harder than she had imagined, Carey said one of the best parts of being at UC Merced is having the pleasure of representing her fellow graduate students as a GSA officer.

“It’s really easy to get involved here and shape the university,” she said.

Potential grad students, she said, should seek out advisers with whom they can have good working relationships, and make sure they love what they are doing for research.

“Otherwise, you’ll really struggle,” she said. Though some might be daunted by the campus’s size or what they see as obstacles, Carey said there are also a lot of opportunities.

For example, potential students might not see every class they want on the offerings list. But they can take classes at any other UC campus, either in person or by teleconference, group together to lobby for a class, or take summer courses as Carey has done at out-of-state universities.

“We are growing, and we’re constantly adding faculty,” she said. “And people here are really willing to work with you to get you everything you need.”