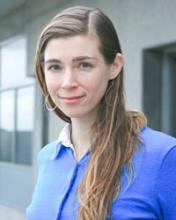 Professor Christine Isborn is doing quantum chemistry at the speed of graphics.

Isborn is using the same graphics computer cards (graphical processing units, or  GPUs) that make your Playstation games so realistic and movie-like to turn her regular old computer into a superfast supercomputer capable of executing the most complex scientific calculations in a fraction of the time it typically takes.

“To make those graphics come to life, the GPUs in a computer are already doing scientific calculations,” she said. “They have to solve equations to figure out how a hockey puck would move or where shrapnel from an explosion would land.

“If you can harness that power, you can perform scientific research calculations much faster.”

You can also do calculations that weren’t possible before, she said, looking at much larger molecular systems and getting a bigger picture of what’s happening at the atomic scale.

Isborn, a physical chemistry professor with the School of Natural Sciences, just received her first set of souped-up computers with multiple GPUs that will run parallel calculations over thousands of cores instead of the single- or multi-core processors most people are used to.

A calculation that would take 81 hours on a CPU can be sped up to 26 minutes with GPUs.

“By using the GPUs, we can look at much larger, more complicated systems,” Isborn said. And the bigger the system, the more GPU cores are engaged, meaning the higher the rate of speed-up on calculations.

The new, hybrid CPU-GPU computers will require more power and a cold server room to work in, just like a supercomputer. But it won’t take up nearly the same amount of space, nor will it cost as much. Basic GPUs are made to be sold to anyone who games, so they have to be priced for the mass market. Companies also manufacture a more expensive, “scientific” GPU, but Isborn said she’s still looking into whether that’s necessary.

“I’m trying to understand how the environment of the protein affects the fluorescence,” Isborn said. These kinds of photoactive/photoreceptor proteins are found in many living things, including humans – in our eyes, for example.

“We don’t know exactly how vision works,” she said. “How does a protein go from absorbing light to sending a signal to the brain?”

That’s just one of the many mysteries the new professor hopes to be able to chip away at with the power of GPUs. Being able to better understand how molecules – and even larger structures such as complex materials or entire proteins – react to light could help design better, more efficient solar cells, for example.

Because it hasn’t been possible to do the kind of large-scale calculations she can do with GPUs, “I will be checking to make sure my methods are still valid at this large scale,” she said.

Isborn, who started at UC Merced this summer, came from a post-doctoral position at Stanford, and is building on work done there. Though when she started college she thought she’d do something with her interest in literature, a particular professor changed her course.

“I had a great undergrad professor in organic chemistry, and I discovered I really liked thinking about the mystery of what atoms are doing,” she said. “It really was one great undergrad experience that changed my path.”