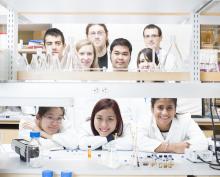 Professor Jason Hein is a tall man. This gives him the ability to look you in the eye, even if he is folded into a rolling desk chair. The DLM team managed to catch the chemist on one of the rare occasions when he was actually in his office, a small room dominated by stacks of papers and a quietly efficient laptop. A tenure-track rising star, the Canadian native has been on the UC Merced campus less than two years, but hit the ground running. Hein started a unique solvent recycling program that is already saving the school thousands and has projects ranging from drug discovery and production to scientific investigation of meteorites.

Building a lab from scratch isn’t easy. Arriving with ten years of experience from the Scripps Institute working under a Nobel Prize winner, Hein was assigned a shared lab space with three other investigators. He was originally approached by two undergraduate students who wanted to work with him, and started carving out a name for himself.

He describes the adjustment with a wry smile: “Running here is like converting from propeller plane to jet flight. While in the air.”

Hein is what is known as an organic chemist, meaning he largely works with molecules found in biological systems. Humans are carbon-based creatures designed in a way that is often termed “bilaterally symmetrical”, meaning we have a left and a right side that are very similar, but what chemists call “chiral”.

If something has chirality, it means it has a mirror image. Think of your left and right hands. They are incredibly similar, they are reflections of each other, but they are not the same hand. This is chirality. Hein works with competitive catalytic reactions. Think of a chemical catalyst as being the key to a car. It may be small, but nothing can happen without it. On a magnified level, a catalytic reaction is a chiral reaction.

The catalyst must fit perfectly with the other molecules. Imagine shaking hands with someone when you meet them. Unlike with your more casual friends, a fistbump is not an acceptable substitute. This may all sound quite simple, but Hein has pursued not only how these reactions occur, but all the processes in between.

“The general theme is staring too long at reactions.” he says.

Hein and his students analyze each step of a reaction, and try to figure out how to make it better. They are specialists. They are the people that their collaborators call when everything is failing and they do not know why. “We’re science SWAT. We show up and say ‘Hey guys, step aside.’” says Hein.

The professor is forthright in his praise of his team. “The quality of research coming out of our undergraduates is fantastic.” He says.

Several of his group will be graduating with multiple publications already on their resumes, and their lab is known for sharing their toys, training students on the high-powered equipment in the lab. While they may play well with other children, the Hein lab is perfectly willing to tackle hard science.

To bring back the idea of chirality, there is something interesting about human beings. All humans, including every one of our amino acids (what makes up our DNA) only use one chirality.

Although mathematically both mirror-image chemicals should occur in equal amounts, we only use the one.

The Hein lab is currently working with NASA on a related project. There are a great deal of chemical reactions that happen in space, including carbon-based reactions. Hein measures if there is an even division of chiral molecules (like there should be if nothing else is affecting them) or if there is a bias.

Using meteorites recovered in Antarctica, the lab checks to see what proportions are present. So far, every meteorite measured has a significant bias. Every one has an excess of the same chirality humans use. There is a great deal of amazing work to be done, but the lab still has a lot of hurdles to clear.

Lab space is limited, although the new science and engineering building on campus is slated to open next year. What hurts the most, though, is the recent federal sequester. Grants that already used to be difficult to win must now essentially be won twice, since every grant is now monitored and often rescinded or significantly reduced.

The Hein lab is a new group and doesn’t have anything to fall back on if funding gets cut to ribbons. Still, they are a cheerful bunch. In the lab space itself, there is a fridge covered in magnet-held chemical readouts, each with a note and a smiley face or a star. Hein passes it and nods at the DLM team’s curious looks.

“Good homework goes on the fridge.” he says. The “good homework” is world-class research that the students will be presenting at conferences later this summer.

Hein says “small efforts lead to major impact,” and he’s right. With limited space, there is some degree of haphazardness, but in a way that works. This chemistry lab is built like a game of Tetris, and the name of the game is “where it fits”, and for the people, it’s “do what works”.