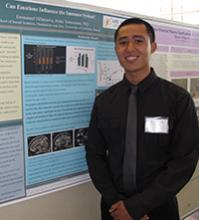 A dozen UC Merced undergraduates will gain an edge in their journey toward a career in biomedical and behavioral research, courtesy of five years' funding from the National Institutes of Health.

The campus recently received a Minority Access to Research Careers (MARC) grant from the National Institute of General Medical Sciences that will give the students experience in conducting research, presenting, writing and networking. The funding, $171,000 per year, is renewable, so there's a good chance more students will be helped.

The grant is to increase the number of highly trained underrepresented biomedical and behavioral scientists in leadership positions. In the United States, African-Americans, Hispanics and Native Americans are some of the most underrepresented groups in biomedical and behavioral research, and with UC Merced's great diversity, applying for this grant made a lot of sense, said Professor Rudy Ortiz, who applied for the funding.

Four students — two juniors and two seniors — were accepted last spring to be in the first cohort.

The students in the first cohort are:

The program will begin accepting applications in February for the two slots in the second cohort, said Jesus Cisneros, director for Undergraduate Research Programs with UC Merced’s Office of Undergraduate Education.

Students who are interested in applying to the program should focus on their fundamental knowledge in math and chemistry and make sure they have good writing skills, Cisneros said. Also, they must want to have a career in creating new knowledge.

"We're not trying to train physicians," he said. "We want them to be doing research."

Ortiz, who received similar support from NIH when he was an undergraduate student at Texas A&M, said diversity is improving in graduate schools, but there's a marked drop when those students accept postdoctoral appointments — which are a crucial step toward a full-time research position.

By building early on a strong interest in research, Ortiz said the universities, including UC Merced, can play a critical role in creating a diverse biomedical and behavioral research workforce.