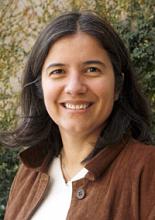 Tropical coral reefs live in a close relationship with single-celled algae called dinoflagellates. The algae offer nutrients to the coral as a byproduct of photosynthesis, while the reefs provide the algae with shelter, protection from other sea life seeking to eat them, and a home that is close to light.

The bond fascinates scientist Monica Medina, who has been studying how corals respond to natural and stressful conditions such as global warming, and coastal development, as well as their response to shifts in the microbial community both in the corals themselves and in the surrounding environments.

“Coral reefs are threatened ecosystems,” says Medina, associate professor in the School of Natural Sciences at the University of California, Merced. “I think society is not paying enough attention. Reefs are disappearing fast, and the mounting pressure is only going up.”

In recent years she has focused her attention on the host coral, using a variety of genomic tools, believing that deciphering the genetic basis of how corals react to such pressures ultimately will lead to ways to improve management and/or inspire mitigation strategies.

She will spend the next academic year, however, trying to better understand the algae, including the dynamics of its codependence.  “We already know a lot about how the host responds, but less about the algae,” she says. “Understanding the relationship between corals and their symbiotic algae is very relevant to climate change research.”

The algae supply the coral with glucose, glycerol, and amino acids, which are the products of photosynthesis, which the coral uses to make proteins, fats, and carbohydrates, and to produce calcium carbonate, which forms the reef structure. Without the algae, the coral would have “a very nutrient poor environment, without much in terms of food,” Medina says.

Medina will be conducting research at the Observatoire Océanologique de Banyuls research station in the Catalan region of France, near the Spanish border, under a Fulbright Scholar grant.  She will be working with researcher Gwenael Piganeau, a member of the Evolutionary and Environmental Genomics of Phytoplankton research group at the station.

“I will be doing similar experiments to what I have done so far, but now focusing on the algae,” she says.  “I want to immerse myself in a group that thinks exclusively about algae.”

Medina’s award came from the J. William Fulbright Foreign Scholarship Board’s Franco-American Commission, which aims to develop understanding between France and the U.S. through educational and cultural exchanges. The commission grants only about five such awards per year.

Medina, 43, also is finishing the sixth and final year of a National Science Foundation (NSF) Faculty Early Career Development (CAREER) award, which she received in 2007. The award supports junior faculty who exemplify the role of teacher-scholars through outstanding research, excellent education and the integration of education and research within the context of the mission of their organization. She has received $1 million for her work over the six years.

Medina, now a U.S. citizen, grew up in Cali, a large city in the south of Colombia, where she first developed her love for the ocean. “I was an avid admirer of nature documentaries, especially marine sciences,” she says. “Cali is two hours away from the ocean and we would go some weekends to the Pacific, but I think my interest for the ocean grew after I saw the beautiful waters of the Caribbean Sea in the north of the country when I was about ten or 12 years old.”

She majored in biology at the Universidad de Los Andes, in Bogotá, where she earned a Bachelor of Science degree in 1989.  Before getting a doctorate, she held a number of research assistant positions, including a two-year internship in Panama at the Smithsonian Tropical Research Institute studying marine taxa, an experience she describes as “transforming.”

She earned her doctorate in marine biology and fisheries in 1998 from the Rosenstiel School of Marine and Atmospheric Science at the University of Miami, and served two postdoctoral fellowships, first at the Marine Biological Laboratory at Woods Hole, Mass., followed by the California Academy of Sciences.

At Woods Hole, she gained a deeper appreciation for biodiversity and microbial evolution, and was exposed to genomic approaches for the first time. This, she says, helped her land a job in 2001 at the Department of Energy’s Joint Genome Institute (JGI) at Lawrence Berkeley National Laboratory, where she received her first coral grant.

“Watching corals spawn while a volunteer diver made me want to work on corals,” she says. “Although I did not do my doctorate on coral reef science, I’d always hoped the opportunity would present itself.”

That happened in 2003 through an idea funded by NSF’s Genome Enabled Biocomplexity program. “I was at JGI at the time the biocomplexity program was active,” she says. “Being exposed to cutting edge technology inspired me to bring these approaches to understanding marine life and, in particular, coral-algal symbiosis.

“The biocomplexity grants required larger teams to execute multidisciplinary science effectively and this first grant enabled us at the time to implement an innovative approach for coral reef science,” she adds.

She believes that the Fulbright grant will enable her to continue to collect critical data that, ultimately, will support global coral preservation. “High throughput science provides an effective way to assess coral health states and responses to environmental insults at a time when rapid action is needed if we want to protect these threatened ecosystems,” she says.