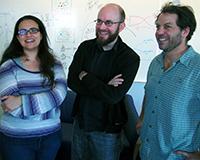 y team of researchers at the University of California, Merced, has begun an ambitious quest to discover common principles that guide evolution of structures at the linguistic and molecular levels.

Professors Rick Dale in cognitive science, David Ardell in evolutionary biology and Suzanne Sindi in applied mathematics will spend the next three years conducting research that employs computational and mathematical models as well as human data to see what kind of fundamental similarities and differences they can find.

"We're thinking of language as an organism that takes shape due to environmental factors," Dale said. "The research could suggest there are common principles guiding this evolution, whether it's in language or biology."

The project is funded by an $800,000 grant from the National Sciences Foundation (NSF) and was sponsored by two different NSF directorates — Social, Behavioral, and Economic Sciences and Mathematical and Physical Sciences. The grant, called Integrated NSF Support Promoting Interdisciplinary Research and Education (INSPIRE), is for radically interdisciplinary and transformative projects. Out of more than 1,000 applications, fewer than 10 percent of projects are funded, Dale said, making it an extremely competitive process.

Dale said the INSPIRE grant is a perfect fit for UC Merced, where the typical walls in academia don't exist.

"There are a lot more cross-cutting collaborations at UC Merced than at other places I've seen," he said.

For this project, the faculty members have been reading each other's papers to gain a better understanding of their different fields. This means cognitive scientists are learning about prions and genetic coding systems, while biological researchers are learning more about how human languages are organized. The researchers are investigating how these systems adapt to their environments in similar ways. To coordinate their activities, the researchers have set up a website.

The key to their research is the concept of selection. Features of the environment select particular versions of proteins, genetic codes or languages because those versions work better in those environments. The models would suggest common principles that guide how systems — at very different levels — change and evolve.

"There should be some similarities and some interesting differences, too," Sindi said. “We’ll be working to understand how selection — biological or cultural — works, and how it works as an organizing principle.”

Though biological structures and human languages are radically different, they share properties that suggest they could be described by a common mathematical framework, the researchers said. Biological structures and human languages are both inherited because of external forces, they are grafted onto a living organism and they reproduce (using cells and people).

"The NSF has just given us resources to stretch the boundaries of our disciplines," Ardell said. "Interesting results almost always come out of collaborations like this."