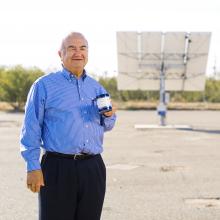 As nature calls time on fossil fuels, researchers at the University of California are finding credible alternatives to oil and coal. It's solar power's time to shine.

We’re running out of fossil fuels and the search is on for clean alternatives. Wind, waves and hydrogen have all grabbed recent headlines, but University of California researchers are bringing back the original renewable energy source: solar power.

The sun-based energy source has some serious advantages over other renewable fuels. The most significant pro is that there are no emissions. No pollutants or byproducts that affect the atmosphere. Solar energy is clean and can be produced without waste.

Its biggest Achilles heel is one that it shares with other alternatives. With current technology, it produces relatively little energy compared to traditional energy sources, making it less cost effective.

By re-thinking how we gather, store and use solar energy, University of California researchers are making solar power the best choice in many scenarios.

Researchers at the University are so convinced that the sun’s energy is tomorrow’s fuel that a multi-campus group has been set-up to investigate. UC Solar develops technologies that make power from the sun a cleaner and cheaper contender.

“Solar is our most abundant and reliable form of renewable energy, and, when used effectively, it has the potential to meet most, if not all, of our energy needs,” said Professor Roland Winston, a solar energy specialist at UC Merced and director of UC Solar.

Advances in storage and increased energy efficiency are the bread and butter of the research at UC Solar—the core developments that drive its credibility.

At UC Riverside, researchers are working on enhanced battery and thermal storage technologies. The sun has plenty of power to give, but not everywhere is sunny.

So, improving battery technology enables solar cells to gather a surplus of energy, ready for use when you are.

The campus doesn’t just develop the technology, it runs on it. UC Riverside’s Bourns College of Engineering boasts a battery-powered building. Winston Chung Hall is charged by a farm of solar-powered, photovoltaic cells that top up a 1.1 megawatt bank of rare earth lithium-ion batteries.

The lights could go out in the rest of California, but Bourns College would still shine.

Over at UC Santa Cruz, researchers have developed scalable Energy Collector and Storage Systems that can be used in residential homes. These new creations capture four more times the solar energy than technology in use now, boosting solar energy collection from 20 percent of the sun’s rays to 80 percent.

There’s activity at almost every University of California campus. UC Merced has developed highly efficient panels that concentrate available light, reducing the costly need to mechanically track the sun across the sky. At UC Berkelely, researchers and students are developing solar cars - sleek vehicles that can reach speeds of 70 mph.

Campuses from UC Irvine to San Diego are working on ways to improve overall the efficiency and energy conversion of existing technologies - but there are also exciting developments that push the limits of how we perceive solar power.

If you’re thinking about those chunky looking black panels you see on rooftops, think again.

Imagine a skyscraper, entirely and self-sufficiently running on solar power. Every window in the building is a solar cell with near full transparency. It’s a vision that’s close to reality thanks to the work of researchers at UCLA.

Lead by Professor Yang Yang, the team has developed a new kind of polymer solar cell (PSC) that produces energy by absorbing mainly infrared light rather than visible light. That makes the cells about 70% transparent.  To put that in perspective, they’re no more opaque than the tinted windows used in new buildings.

The cells have other clear advantages too.

“The technology you see on current rooftops is silicon-wafer technology. There are several problems with that. The cost is pretty high,” says Professor Yang.

"Our new PSCs are made from plastic-like materials and are lightweight and flexible. More importantly, they can be produced in high volume at a low cost."

So could Yang’s breakthrough one day supply all our energy needs?

“I don’t think there is a single technology that can replace fossil fuels,” Yang says. “We might have a combination of different technologies. Solar might be used alongside bio-fuels for example.”

Or combinations of different solar technologies might be used to enhance energy collection and storage. For example, highly efficient, but expensive, silicon wafer technology could be used alongside cost-effective transparent panels. It’s a win-win.

Some innovations in solar are decidedly less high tech — but just as clever.  Daylighting, for example, is an ingenious solution. Channeling natural light deep into buildings, it literally brings the outside in.

First conceived by Dr. Winston in 1970, the cones concentrate light from large, exterior openings, to a smaller, interior focal point. The technology has been developed by a partnership between colleagues at UC Berkeley and Singapore.

Using daylight inside buildings isn’t a new idea—we’ve had skylights and atriums as architectural elements for centuries. But daylighting extends the concept in new ways, inspired by the desire to conserve energy.

Winston says that this is another example where we can combine high and lower-tech solar solutions to meet our lighting and energy needs.

“The more we embrace solar energy, the more we come to realize that there are still opportunities for innovation,” Winston says, “There are also challenges. But we are beginning to experience a future where the full potential of solar energy is being realized—to everyone’s benefit.”

One thing becomes apparent as we sift through the prolific number of breakthroughs coming out of UC Solar. The future is bright.