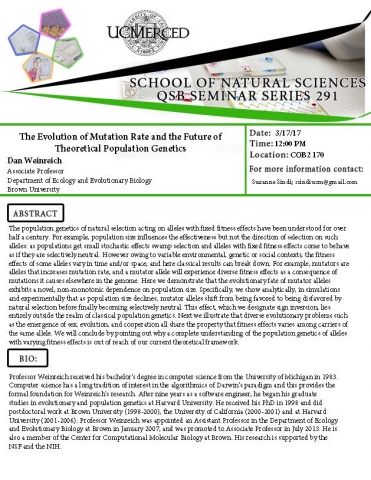 Professor Weinreich received his bachelor's degree in computer science from the University of Michigan in 1983. Computer science has a long tradition of interest in the algorithmics of Darwin's paradigm and this provides the formal foundation for Weinreich's research. After nine years as a software engineer, he began his graduate studies in evolutionary and population genetics at Harvard University. He received his PhD in 1998 and did postdoctoral work at Brown University (1998-2000), the University of California (2000-2001) and at Harvard University (2001-2006). Professor Weinreich was appointed an Assistant Professor in the Department of Ecology and Evolutionary Biology at Brown in January 2007, and was promoted to Associate Professor in July 2013. He is also a member of the Center for Computational Molecular Biology at Brown. His research is supported by the NSF and the NIH.